Tesla’s bust soon to be in Turkey

A bust of Nikola Tesla, the work of Banja Luka sculptor Bojan Mikulić, will soon be erected in Izmir, Turkey, at the University of Economics. In the fall, Tesla’s bust will be placed in the University’s park.

Nikola Lončar from the Tesla Science Foundation (Philadelphia) will hand over Tesla’s bust to Zoran Marković, General Consul of the Republic of Serbia in Istanbul, who will handle further proceedings. The Rector of the University in Izmir is pleased to accept this present and the organizers hope that the Rector of Belgrade University will also attend the event.

This idea arose quite unexpectedly in May 2015, when the Izmir Chamber of Electrical Engineers organized the symposium “Nikola Tesla – Pioneer of Electricity”, attended by more than 1,200 people. A large number of journalists reported on the event and Tesla’s fans throughout the world watched a live broadcast from the symposium on the Internet. Speakers at the symposium included Branimir Jovanović, Director of the Nikola Tesla Museum in Belgrade, Nikola Lončar, President of the Tesla Science Foundation, and Hussein Yesil, President of the Izmir Chamber of Electrical Engineers. They gave a stirring presentation of Nikola Tesla’s life and work.

“Tesla is an inspiration! Young people and students in Turkey are very open and interested in new knowledge. I must admit – we were not planning to give them Tesla’s bust. But we were so touched by the attention and interest in Tesla and his work that we wanted Tesla’s bust to be here for coming generations. When the new school year starts in the fall, Tesla’s bust will embellish the University’s park. This is the tenth bust of Tesla that our foundation has donated,” said Nikola Lončar from the Tesla Science Foundation in Philadelphia (USA). 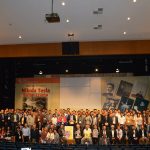 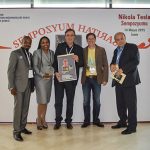 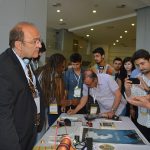 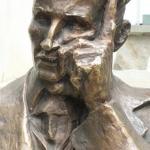 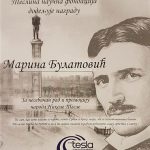 Comments Off on Tesla’s bust soon to be in Turkey