Next Move: Ambassadors of Serbia, Croatia and Montenegro to the UN

The letters addressed to the ambassadors of the three countries suggest that contact should also be made with the government of Austria, where Tesla studied at the Polytechnic Institute in Graz, the government of the Czech Republic and Slovakia, where many firms in the electronics industry bear the name “Tesla”, and also the government of Hungary, where Tesla invented a rotating magnetic field. In addition, the American government should certainly help with this action, because Tesla lived for nearly 60 years in New York and dedicated his talents and knowledge to America, as well as the world.

“Nikola Tesla is a famous émigré who made America the way it is today,” said President Barack Obama recently.

“I have already met with the ambassadors of Serbia, Croatia and Montenegro to the UN, and they said they are willing to help. They asked our Association to send a request for a joint appearance of the Balkan countries at the United Nations, which we did. We are very happy that the Serbian government in Belgrade (at the session held on August 2010) voted that Tesla’s birthday – July 10 –will be celebrated as a Day of Science in Serbia,” says Dr. Ljubo Vujovic, Secretary General of the New York branch of the Tesla Memorial Society. He also added:” It is well known that Nikola Tesla was awarded the Order of Danilo I in 1895 by Montenegrin Prince Nikola. The history of Serbia, Croatia and Montenegro was an inspiration to Nikola Tesla. We hope that these three countries together and united will save our mutual genius from oblivion.”

Note: Dr. Ljubo Vujovic is a doctor in New York. He has devoted 40 years of his life to researching and promoting the work of Nikola Tesla. Dr Vujovic received a “City Council Citation” in New York for his medical practice. 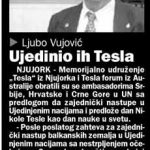 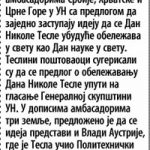 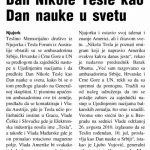 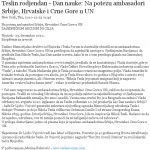 Comments Off on Next Move: Ambassadors of Serbia, Croatia and Montenegro to the UN