Award for Project on Saudi Arabia

02-Jun-2010
Belgrade (Serbia) – For the thirteenth time, the Public Relations Society of Serbia awarded prizes to organizations and institutions for projects that were most successful in the area of communication.

The ceremony was opened by Mr. Božidar Djelić, Deputy Prime Minister for EU Integration and Minister of Science and Technological Development.

Marina Bulatović won an award for her project “Saudi Arabia Through My Lens” in the category of personal and civic initiatives in the field of communication.

Born in Serbia, Marina has lived in Saudi Arabia since 2007. She worked for 15 years as a PR consultant and PR director for leading marketing agencies in Belgrade: Communis, Ogilvy & Mather, McCann – Erickson PR, and A Media… After moving to Saudi Arabia, Marina started working as a journalist. She writes for newspapers and magazines in Montenegro, Serbia and Canada.

To date, Marina has published over 250 articles about Saudi Arabia. She also organized the photography exhibition “Saudi Arabia Through My Lens” in Serbia (Belgrade September 30 – November 15, 2009) and Montenegro (Podgorica June 7-17, 2010).  More than 45,000 people visited these exhibitions.

“I am tremendously happy that I had the opportunity to present Saudi Arabia to the Serbian and Montenegrin public. I believe my husband and I have managed to describe traditional Saudi Arabia with its culture and customs in the best possible way.

I believe that the time will come when there will be less talk about differences, and instead the focus will be on the similarities between countries, religions and people, laying a new foundation for a prettier and happier future on earth. Thanks to these types of cultural exchanges and cooperation, we can come to know various countries and nations we know little about and thus reduce the bias that we have toward each other. This award is very important to me because it comes from my colleagues in the PR business, and they know the importance of good communication.

I would like to thank everyone who helped me realize my idea. As my Saudi friends would say: ‘shukran’.” Said Marina at the ceremony.

Photographs:
1. Marina Bulatović and Božidar Djelić, Deputy Prime Minister for EU Integration and Minister of Science and Technological Development
2. Marina Bulatović receiving her award for the project “Saudi Arabia Through My Lens”
3. Marina with the award
4. Diploma 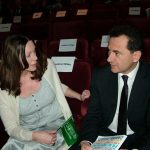 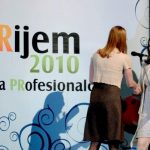 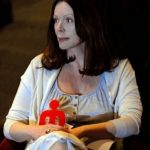 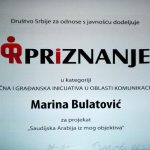 Comments Off on Award for Project on Saudi Arabia