Exhibition “Saudi Arabia Through My Lens” in Serbia

19-Nov-2009
A photography exhibition held recently in the Serbian capital of Belgrade devoted entirely to showcasing the Kingdom of Saudi Arabia came to an end Monday.

Serbian expatriates in the Kingdom, Marina and Budislav Bulatović, hosted an exhibition of their photographs of Saudi Arabia at the RK Belgrade, called “Saudi Arabia Through My Lens” on September 30. The exhibition was extended twice due to the high level of interest it generated. More than 30,000 people encountered Saudi Arabia for the first time through the photographs.

“Here in Serbia we know little about Saudi Arabia, although it plays a significant role in world affairs,” remarked Marina. “I am very happy because more than 40 media sources in Serbia wrote about our exhibition, and two leading TV stations in Belgrade broadcasted features about the event.”

In addition to the photographs, mannequins dressed in traditional Saudi attire – the thobe and abaya – were also exhibited as well as road signs and local newspapers. Marina added that dates were served as a typically Saudi gesture of welcome to each visitor.

The event was attended by a number of VIPs including the Ambassador of Algeria in Serbia, Mesdoua Abdelkader; Serbian Count Radovan Dudvarski; Mhana Sammy, First Secretary to the Embassy of the State of Palestine in Belgrade; Count Tolstoy, a descendant of Leo Tolstoy living in Paris; the Egyptian Consul from the Embassy of Egypt in Belgrade, and numerous local journalists and artists.

The exhibition consisted of 35 photos portraying ordinary people, taken at the Kingdom’s Heritage Festival, in cafes, and at art exhibitions. This project developed from the photographers’ desire to bring the two nations closer together and introduce them to each other through their traditions and culture, and to improve understanding between them, hoping that this exhibition might be the beginning of an inter-cultural exchange and cooperation between Serbia and Saudi Arabia. 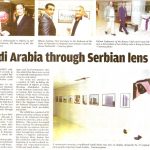 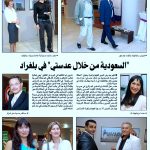 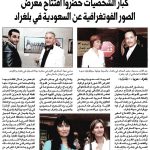 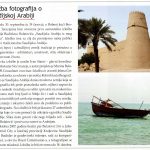 Comments Off on Exhibition “Saudi Arabia Through My Lens” in Serbia