Tesla’s birthday – National science day in the Republic of Srpska

With the blessing from His Grace the Right Reverend Irinej, Bishop of Eastern America and on behalf of the Tesla Memorial Society from New York, we sent letters to the Government of Republika Srpska – to Mr. Milorad Dodik, Serbian member of the Presidency of Bosnia and Herzegovina, and to Ms. Željka Cvijanović, President of Republika Srpska, with a suggestion for:

Tesla’s birthday, July 10th, to be the National Science Day in Republika Srpska

At the beginning of 2010 we sent a similar suggestion to Mr. Božidar Đelić, then Deputy Prime Minister of the Republic of Serbia and Minister of Science and Technology. In January the same year, we started a large media campaign for the Republic of Serbia to declare Tesla’s birthday the national Science Day and to our great joy, that was done. Besides that, November 10 is the World Science Day established by UNESCO.

In Serbia, the World Science Day was observed in 2011. The same year, besides that day, which the Republic of Serbia observes as a member of UNESCO, the Government established the National Science Day on July 10, the day when Nikola Tesla was born.

Given that this was ten years ago, we would like you to consider our suggestion, so that Republika Srpska, with its more than a million inhabitants, could celebrate Tesla, one of our greatest sons.

Nikola Tesla was born on July 10, 1856, in the village of Smiljan, in the Austrian Empire, ruled by Franz Joseph I. Tesla was born to a Serbian family: mother Georgina – Djuka, née Mandić and father Milutin Tesla, an Eastern Orthodox Priest.

We think that besides the Serbian Orthodox Church our great people such as Nikola Tesla, Mihailo Pupin, Mileva Marić, Milutin Milanković, and many others… should be the focal point for the gathering of pan-Serbian people, wherever they live.

Our public doesn’t know that the first memorial rites for Nikola Tesla were held at the Serbian Orthodox Cathedral in Belgrade on January 23 in 2006. The memorial was organized at the suggestion of his Holiness Archbishop, then Hieromonk Irinej, Church Clerk of Holy Synod of the Serbian Orthodox Church for Interfaith and International Affairs, who was elected Bishop of the Serbian Orthodox Eparchy of Australia and New Zealand in May 2006, and Dr. Ljubo Vujović, President of Tesla Memorial Society in New York.

As Tesla’s cremation was not in accordance with his wishes, but rather with those of his nephew and heir Sava Kosanović, this made it possible for the memorial service to be performed then and ever since.

We will send a similar suggestion to the Government of Montenegro. We sent one in 2010, but it was unsuccessful.

We shouldn’t forget the fact that the King of Montenegro Nikola I decorated Tesla with the Order of Prince Danilo,1st Class, in 1895. The decoration came right after the announcement that the first electric plant in Niagara Falls was completed based on Tesla’s patents. Numerous newspapers and scientific journals congratulated Tesla because 9 out of 12 patents that made the power plant work were his.

Our next step is for Tesla’s birthday to become an International Holiday of Nikola Tesla.

We would like to remind you that in 2002, the Tesla Memorial Society of New York, together with its sister organization from Australia (Tesla Forum), started an action to declare the International Day of Nikola Tesla, which should be a holiday of the progress of humanity among all nations of the world.

One need not mention what proclaiming an international holiday on Tesla’s birthday would mean for the image of the Serbs in the world. The respect we would gain as the people that gave to the world such a large number of scientists would be important today as well as in the future in all countries where Serbs live. 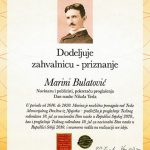 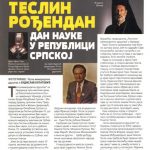 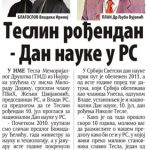 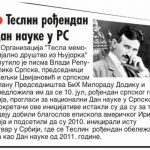 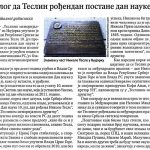