How Tesla Re-emerged Among the Serbs

Well-known and accomplished scientific journalist and author Aleksandar Milinkovic has been preoccupied with the life and work of Nikola Tesla for more than two decades. He has tirelessly studied the rich legacy of the famous scientist, and continues to do so. Milinkovic has published his findings in several books, and is currently working on a documentary about Tesla that should be finished by the end of this year.

We were interested to learn more about the motives or incentives that inspired Milinkovic to begin his research on Nikola Tesla.

He explained that his main idea was to preserve the memory of Nikola Tesla and his scientific genius, and bring him closer to the public by revealing unknown details from his scientific, business and private life.

“I worked for Galaxy magazine from its launch in 1972 and over time we sporadically wrote pieces on Tesla. Those were mostly dry, one-sided and boring stories told a thousand times before and utterly uninspiring for anyone who wanted to do any serious research on Tesla’s magnificent work. And then a book by Margaret Cheney, “Tesla: Man Out of Time”, published in the US in 1981, came into my hands and gave me a powerful incentive to conduct a detailed investigation of Tesla’s work and life. This book opened my eyes about so many things, giving Tesla’s work a variety of layers, so to speak. Hence, he – and I will reveal this later in my books – was not only a man who made an immense contribution to electrical engineering, but was also a scientist who made significant discoveries relevant to various areas of medicine, geology, telegeodynamics, etc. It is not common knowledge that Tesla’s discoveries were the foundation for a number of today’s necessities we can hardly imagine our lives without – home appliances, radio, TV, computers…” said Aleksandar Milinkovic.

Based on the book by Margaret Cheney, Milinkovic wrote a series of articles and published them in Galaxy, requesting that the Nikola Tesla Museum in Belgrade “open and examine its documentation” and make it available to researchers and young people so that they might be motivated to take on related studies. However, Veljko Korac, who was the manager of the Museum at the time, did not like this…

“The late professor Veljko Korac had a very harsh reaction to that… He understood it as a direct assault on the Museum, since I wrote that this institution was more like a church than an active, productive organization – such as it should be. So we sat down and agreed to find a productive solution. We decided that I should create a project comprising suggestions for the representation of Tesla in a different, novel light. So I developed a project called “Tesla’s Unrealized Discoveries”. We gathered a lot of people from the former Yugoslavia around this project. In two weeks more than 60,000 copies of the magazine were sold which was a clear sign that interest in Tesla is still alive,” explained Milinkovic.

He states that today the Museum is a completely different story, and he has only nice words to say about the current manager, Mr. Vladimir Jelenkovic.

“Until he came to this position, the atmosphere at the Museum was isolated and cold. From its opening in 1953, the Museum’s entire archive, comprising 9.5 tons of material, including machinery, engines and Tesla’s wardrobe collected by Sava Kosanovic, plus 160,000 documents, hadn’t been touched. This was because pursuant to Serbian laws governing archival materials, unclassified and untreated materials are not allowed to be used, and no one had ever bothered to inventory the collection properly – nobody had reviewed those documents ever before?! To make the scandal even worse – two years ago we received official notification from UNESCO that the Museum of Nikola Tesla belongs to the world heritage as an archive. Before Vladimir Jelenkovic became manager things were at a standstill, unlike the increasing pace at which they are now moving forward. When Vladimir became manager of the Museum only 30% of the collection had been classified, and today – 90% of the materials have been processed and digitalized. Soon all of these documents will be available at the Museum’s website and that should provide an opportunity for researchers to make some new discoveries.”

“The USA and other countries that had access to copies of Tesla’s documents and the means for modern technology have a strong defense technology today largely based on Tesla’s discoveries.” said Milinkovic.

So far, Aleksandar Milinkovic has written seven books about Tesla and three more are expected to be published quite soon.

“I have divided these books according to areas of my research in order to produce a complete picture of Tesla’s life and work at the end. The first book I wrote, “Third Millennium Inventor”, offers general insight into Tesla’s life and work. This is the first Serbian book published in Slovenia after the breakup of the former Yugoslavia. Then there is the book, “Tesla’s Secret Weapon”. It was published in 1999. After that, I wrote a book on Tesla’s documentation – “Tesla: The FBI File”. It’s a known fact that the FBI followed Tesla constantly and after he died they continued to follow his only heir, Sava Kosanovic. At that time the FBI considered the possibility of removing Kosanovic (one way or another) and taking over Tesla’s entire archive, but luckily they gave up on that idea. However, according to a warehouse guard, on January 23, only a few days after Tesla’s death (on January 7, 1943 – it is not certain that this is the correct date), a group of uniformed people came to the warehouse in Manhattan where Tesla’s documents and machines were kept, inspected the documents and most probably put them on microfilm. In this way, the entire documentation remained in the US. Who knows – maybe they even have more documents than we do.”

When he speaks of the three books he is preparing, Milinkovic insists that he is actually working on one large book that will cover and combine everything he has discovered to date. “The things I’m publishing these days, while I wait impatiently to see the book published, are in fact the most interesting excerpts from the book that can be guidelines for getting to know Tesla. So, the working title of one of the books is: “What Would You Ask Tesla?” and it consists of answers to frequently asked questions about Tesla. It will be very accurate, but a ‘light’ book that doesn’t go into technical details.” explains the author.

He also plans to revise the edition of “Tesla’s Unrealized Discoveries” from 1984 in cooperation with the Museum by adding pieces written by all of the former managers of the Museum, since they are the closest to Tesla’s archive and consequently major authorities in that field. And that’s not all of his research. The author is meticulously preparing and, in cooperation with film director Bane Milosevic, finishing a documentary about the brilliant scientist. The premiere is expected by the end of this year.

“The film is almost finished. I have worked on that project for 2-3 years. I’m the one who wrote the script, basing it on all the documents from my books. All the people speaking about Tesla in the movie are experts on Tesla’s work. Of course, we are short of funds to shoot some additional material, but we sincerely hope that we will find a sponsor to support us.”

At the end we asked if there will be any more movies about Tesla.

He laughed in reply and added: “Find me a producer and there will be more movies and books both here and abroad.”

Aleksandar Milinkovic is one of the first and most experienced among Serbian journalists. He is one of the founders of Galaxy magazine, and the founder and owner of the magazine Secrets, the Zodiac and the Cosmos (Tajne, Zodijak & Kosmos). His idea was behind the launch of Planet magazine. Currently he is the senior editor of Through Space and Time magazine (Kroz kosmos I vreme). He has published interviews with famous foreign and domestic scientists, including Sinisa Stankovic, Pavle Savic, Frederick Sanger (Nobel Prize for chemistry), Abdus Salam (Nobel Prize for physics), Stephen Hawking, Roger Penrose, Jacques-Yves Cousteau, Simon Wiesenthal, and Ota Kulhánek. He is creator of the project called “Tesla’s Unrealized Discoveries” (1984) and author of the following books: “Tesla: Third Millennium Inventor” (1998, six editions in Serbian and one in Slovenian), “Tesla’s Secret Weapon” (1999, nine editions), “Tesla: The FBI File” (five editions), “Tesla: Wizard or Genius” (seven editions)… In 2006, during the 150th anniversary celebration of Tesla’s birth, the Croatian national television visited Milinkovic in Belgrade and conducted an interview that served as the basis for their film on Tesla. 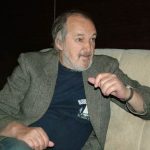 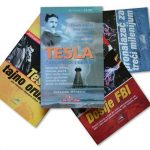 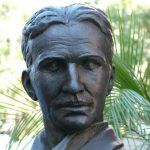 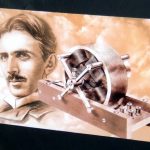 Comments Off on How Tesla Re-emerged Among the Serbs